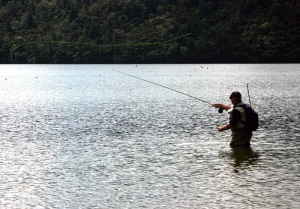 Fly fishermen in Utah and Wyoming know them as “rock rollers,” but a University of Utah bioengineer has begun to research the caddisfly larva’s adhesive silk for medical purposes. It could become a cheap dental alternative to oral surgery. Since the insect spins and uses its silk underwater, researchers are trying to develop a synthetic version of the sticky tape with which surgeons can close wounds, especially in moist areas like the mouth.

Some species of caddisfly larvae develop underwater by building a tiny, inch-long “house” around themselves out of silky threads and debris, usually sand or bits of rock. Trout eat them, so fly fishermen in Wyoming and Utah often use them as cheap bait. When placed in an aquarium with small glass beads, researchers found that the larvae continued to add onto their homes with the beads. Scientists discovered that the adhesive strands of the flies' silk could stick to a diverse range of items underwater, whether soft or hard. Caddisflies spin ribbon-like threads out of an organ called the spinneret. They create their tubular homes by weaving the threads throughout pieces of sand, twigs and even leaves, sticking them all together from the inside with the sticky substance.

Because it sticks to organic and inorganic objects, both hard and soft, the caddisfly's excretion has great potential for adhering to different tissues in the human body for a cheap suture. This could include oral surgery, as it is performed in a perpetually moist environment. It is similar to threads from silkworms, but it has the ability to adhere underwater. Researchers have not yet studied how strong these threads are, but they plan to do so.

“Individual threads aren’t very strong, but it [the caddisfly] lays down dozens of them,” said bioengineering associate professor Russell Stewart, principal author of the new study. “If we can copy this material and make tape out of it, the bond strength would go up dramatically.”

The Need for an Adhesive

Finding cheap dental adhesives and others that would work in moist environments has proven difficult for medical professionals, because adhesives generally deactivate when they come in contact with moisture. If the study progresses as researchers anticipate, imitation caddisfly silk may replace normal sutures. It might be almost like using a piece of tape to close an incision, Stewart said.


Researchers are still in the early stages of this study, but if they discover how to harvest a synthetic version for use in the human body, caddisfly silk could be a cheap dental advantage for oral surgery.